People Are Talking About... 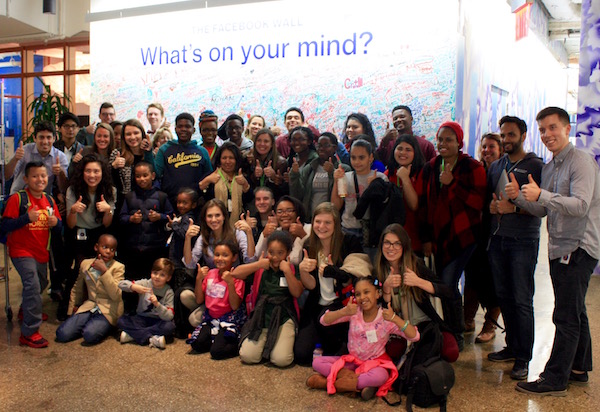 The students, who ranged from third grade to high school, also got to meet Horizons National’s ambassador, Allison Williams, who told them about her long-standing involvement with, and belief in, Horizons. Students were then able to ask all kinds of questions to a panel of Facebookers moderated by Ms. Williams, and enjoyed touring Facebook’s exciting office space (including several snack stations!).

But Horizons students weren’t the only ones learning new things; many Facebook employees attended the event as well to find out more about Horizons, and about the partnership Facebook and Horizons have built together. It was the first of what Horizons expects to be quarterly Facebook visits, which will focus on specific ages and specific topics important to those ages.

When it was all over, Allison Williams summed it up best: “I cannot wait until this becomes something these students can look forward to regularly. And I love the idea of them becoming comfortable and at ease in the offices of one of the biggest companies in the world.”

She noted that when Horizons takes its students to places like college campuses and workplaces, it “sends a big message about what kind of environments WE see them in in the future. It helps them realize that it's okay for them to picture themselves on those campuses too, someday. Being able to spend time at the Facebook office? Unreal. We get to encourage them to dream BEYOND college – and that's amazing.”

All of us at Horizons thank Allison for her help, and thank Facebook for inviting our students in to see, to dream, and to imagine what their future can be. A new study from the RAND Corporation identifies two predictors for student success in voluntary summer programs: attendance and retention. Simply stated: students with a high attendance rate, and who participate for multiple summers, benefit the most from programs in mathematics and language arts achievement.

Commissioned by The Wallace Foundation, the RAND study sought to find out whether and how voluntary summer programs can help low-income urban students succeed in school. It turns out attendance plays a big role: high attenders in the first summer of the study gained a significant and substantial benefit in mathematics; high attenders in the second summer had better outcomes in both math and language arts.

These findings confirm what we’ve always known at Horizons. Our programs help students from low-income families succeed, and we’ve long stressed the importance of attendance and retention. This summer, our Horizons network-wide attendance rate was 94% – a commitment by our students and families that carries over to the regular school year. As for retention, 87% of our students return year after year.

With students attending at a high rate, and staying with Horizons 6 years on average, the new study confirms just a few of the reasons Horizons is a long-term commitment that works.